Where: Multiple Locations along San Diego Bay
When: 9:00pm
Take in the largest fireworks display in the county! With fireworks launched from four barges placed around North San Diego Bay, they can be seen from multiple locations along the San Diego coastline.  Just find a place along the bay, set up a blanket and some hot chocolate, and get ready for the display! We recommend arriving early to reserve a spot.

Where: SeaWorld San Diego – 500 SeaWorld Dr, San Diego, CA 92109
When: 10:00am to 10:00pm
SeaWorld San Diego will celebrate Independence Day with a 15-minute display of fireworks set to a musical soundtrack, starting at 9:40pm on July 4th. Entrance is required, and there are plenty of spots throughout the park to watch the display. You can reserve seats ahead of time via seaworld.com.

Where: Ocean Beach Pier (end of Newport Avenue)
When: 9:00pm
Spend Independence day picnicking, swimming in the ocean, walking and playing in the sand, and shopping along Newport Ave. Then bundle up as the sun sets and pull up a blanket for a really spectacular fireworks show launched from Ocean Beach Pier! Free parking will be available at the Main Beach Parking Lot as well as at the Pier Parking Lot. We do recommend arriving early to reserve a spot — head to obsandiego.com for more information.

Where: Old Town State Historic Park
When: 11:00am to 4:00pm
Although Old Town won’t be putting on a fireworks display, there will be a parade, crafts, and activities all throughout the day on July 4th. The activities will recreate an old-fashioned Independence Day just as it was celebrated on the frontier. You’ll also be able to compete in several contests, including cherry pit spitting or an egg toss, for handmade ribbons. 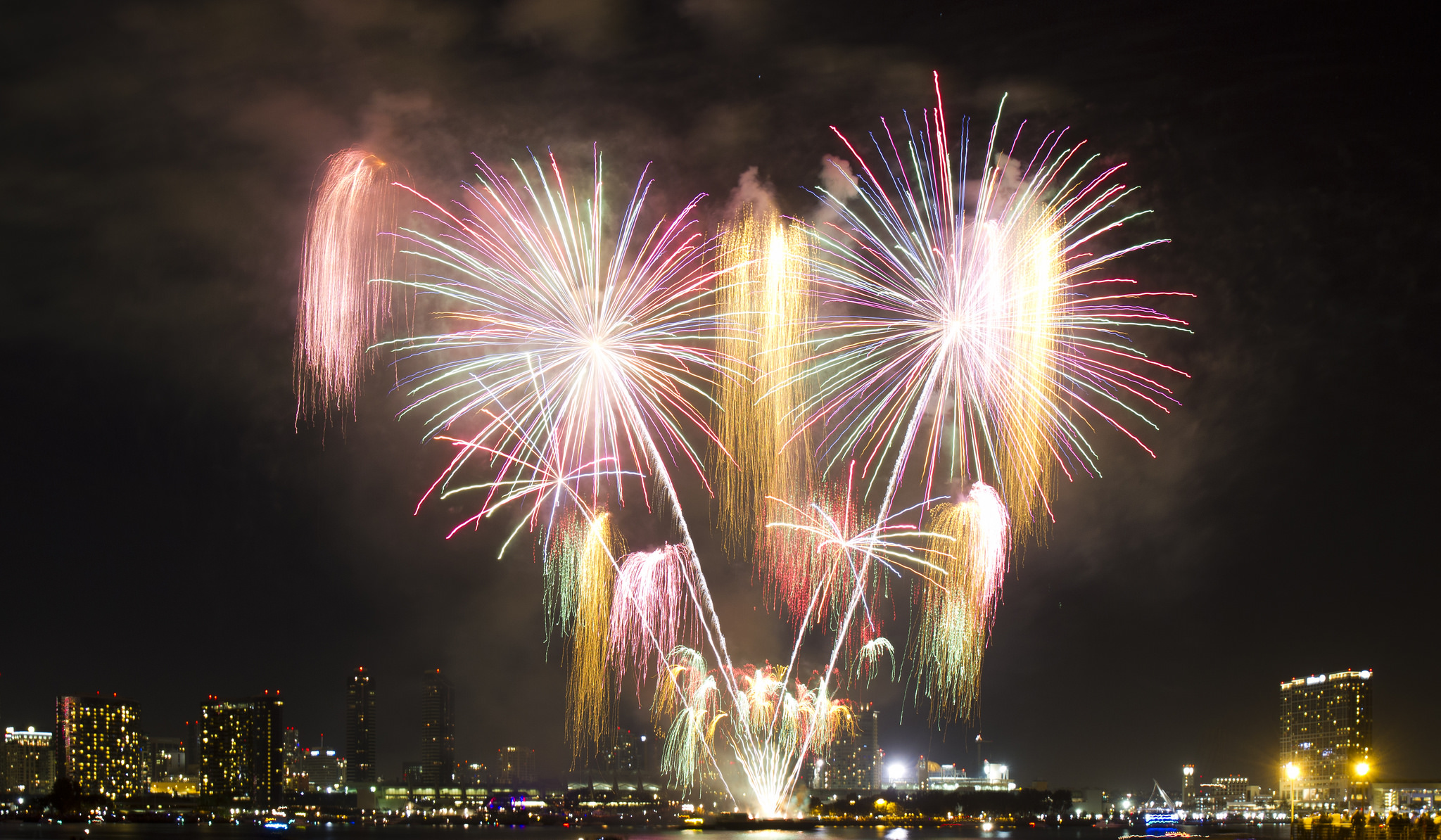 4th of July Celebration in Coronado

Where: Various Locations on Coronado
When: 7:00am to 9:00pm; Fireworks at 9pm
Celebrate the 4th of July in the Crown City! Independence Day activities will include a parade down Orange Avenue at 10:00am, a concert in Spreckels Park at 4:00pm, and fireworks over Glorietta Bay at 9:00pm. The fireworks display can be easily viewed from anywhere along the bay on Coronado Island.

Earlier that day, the Crown City Classic 4th of July Race will take place between 7am and 10am. This historic run through Coronado will feature a 12k and a 5k, and kicks off at Coronado Tidelands Park.

Where: Del Mar Fairgrounds (2260 Jimmy Durante Boulevard, Del Mar, CA 92014)
When: Starts at 10:00am, Fireworks at 9:00pm
Independence Day is one of the best days to come to the San Diego County Fair, because they pull out all the stops with food, fireworks at 9:00 PM, entertainment, and more! Fireworks are launched from the west end of the racetrack and are choreographed to a soundtrack played through the Corona Grandstand Stage sound system. The fireworks are visible from many areas of the Fairgrounds, with favorite viewing areas including reserved Terrace seating and 2nd and 4th levels of the Grandstand, Family Funville, and the Fun Zone.

Where: LEGOLAND California (One Legoland Drive, Carlsbad, CA 92008)
When: 1:00pm to 9:00pm, Fireworks at 8:30pm
Take the whole family and spend the day enjoying over 60 rides, shows, and attractions at LEGOLAND along with some all-American picnic games like burlap races and water-balloon tosses. Then cozy up with a blanket and a picnic that evening, and watch the awe-inspiring fireworks display set to patriotic music!
[ad size=728×90] 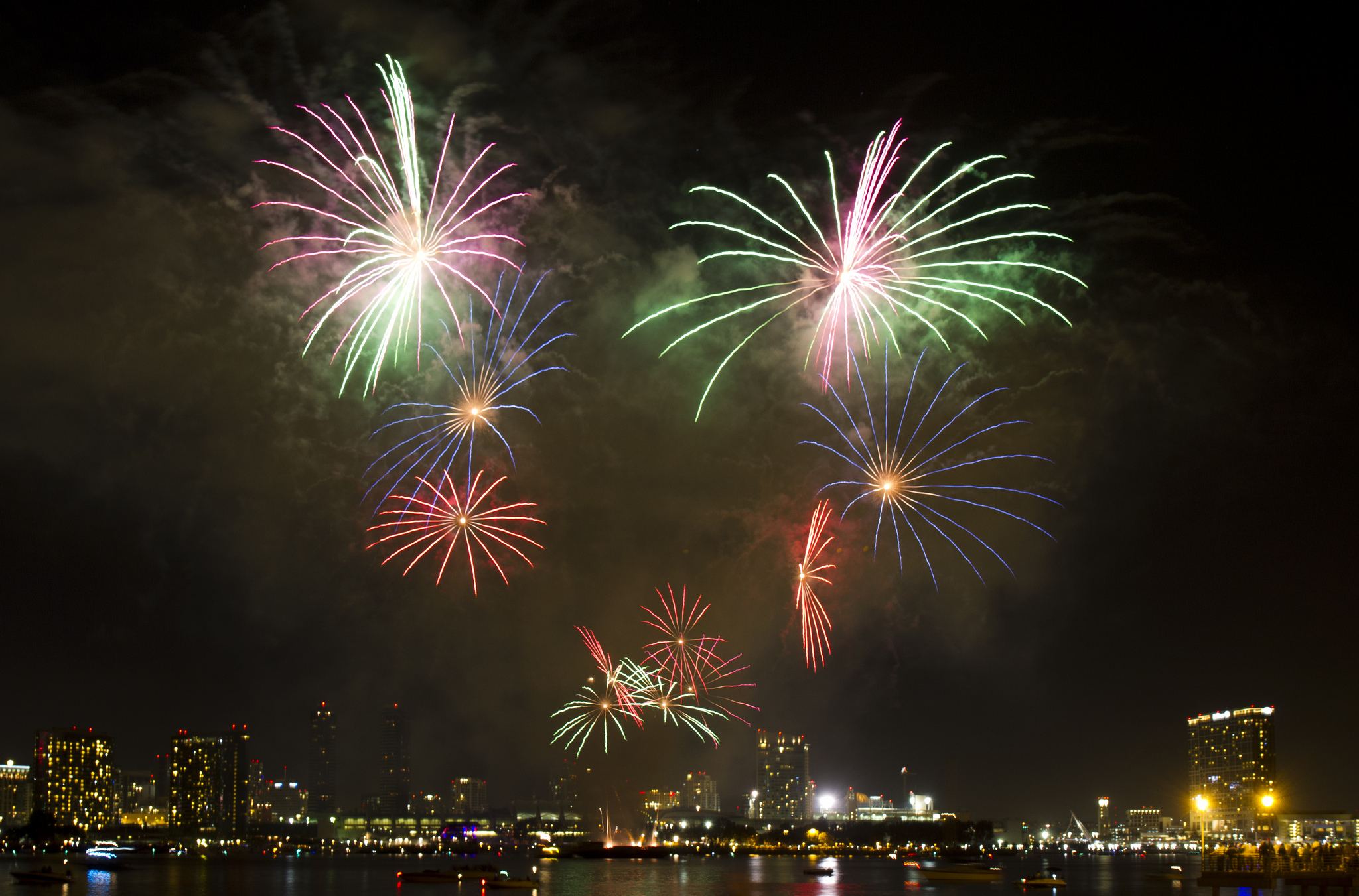 Where: 16948 Avenida de Acacias, Rancho Santa Fe, CA 92091
When: 12:00pm to 3:00pm
Pack a few blankets and chairs for Rancho Santa Fe’s Annual 4th of July Parade & Picnic! The parade kicks off at 12:15pm, and will include floats, vintage cars, and equestrians. The picnic and concert will begin at 1:30pm, complete with a barbecue and live music by The Harmony Grove Band.

Where: Poway High School
When: 6pm – 10pm; fireworks at 9pm
The fireworks in Poway start at 9 p.m. at Poway High School (15500 Espola Rd.). The gates will open at 6 p.m. and the event will include games and a DJ spinning tunes; it costs $5 per person to get in and kids 11 and under get in free. Meanwhile, during the day, the Old-Fashion Fourth of July Celebration goes down from 10 a.m. to 4 p.m. at Old Poway Park (14134 Midland Rd.), a patriotic party, “turn-of-the-20th-century-style.” That event includes western-style reenactments, free crafts, train displays and old-timey games. Free shuttles to the daytime fest will run from two locations: the Poway City Hall parking lot on Civic Center Drive, and the Poway Adult School parking lot on Twin Peaks Road.

Where: Oceanside Blvd & Rancho del Oro Road, Oceanside, CA
When: July 3, 2018
Time: 6:00 to 10:00pm, Fireworks at 9pm
You’re invited to the City of Oceanside annual Fireworks Show! Spectators are encouraged to arrive anytime after 6:00 pm, park in the business park nearby, bring a beach chair, and walk to the viewing area on Rancho Del Oro road. There will be live music as well as food trucks offering a wide variety of foods. The firework show will begin at 9pm.

Then, on Wednesday, July 4th at 10am, head to Oceanside Beach and Pier for more festivities! Main Street Oceanside will be hosting a variety of booths and activities in the plazas, parks, and parking lots from the Oceanside Pier to Tyson Street Park. The day will include kids’ crafts and activities in the Pier Amphitheater, with a wide range of food vendors. There will also be retail vendors of all kinds in both the Pier Plaza and in the parking lot south of the Pier Amphitheater.