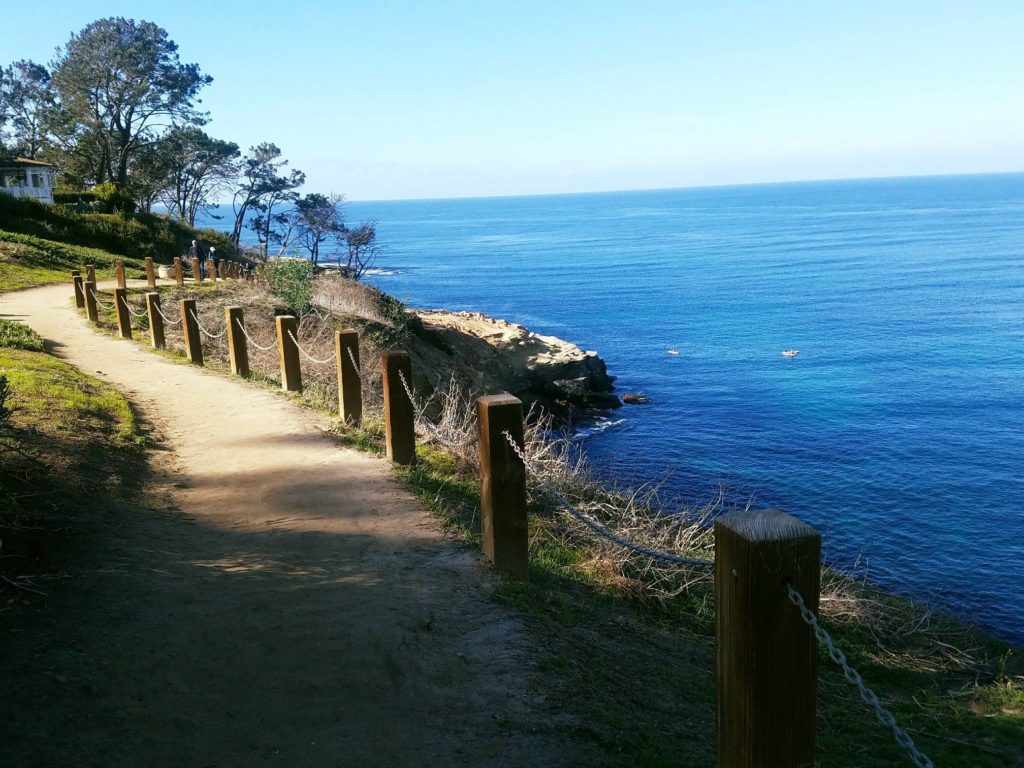 La Jolla California is full of hidden gems and beautiful coastal views, but there are few as gorgeous as the historic La Jolla Coast Walk Trail. First conceived in the early 1900s, the hiking trail has undergone several changes through the decades; today, it’s one of the most popular hiking trails in all of La Jolla California.

From the hike, you can spot several nearby attractions; including La Jolla Cove, La Jolla Shores beach, and on a super clear day, even downtown San Diego. Here are a few fun facts we unearthed about this gorgeous spot in Southern California!

1. The trail was given historic designation in 1990.

Although the footpath was built to its current configuration in 1932, it wasn’t formally recognized as a historic site deserving of preservation until just a couple of decades ago. Today, its conservation is overseen by the City of San Diego. In fact, this year they are to begin construction on a restoration project for the bridge towards the end of the hike. The bridge over the canyon was wiped out last year after a storm and has been deemed unsafe for pedestrian use; the reconstruction will hopefully be finished by the end of 2018.

2. It’s believed to have been used as a hunting trail by Native Americans.

Though little else is known, archaeologists have found artifacts and evidence of late prehistoric Indian villages that dates back 9,500 years beneath the stratified soil in La Jolla — meaning they are among some of the oldest remains ever found in Southern California. Much of their activity along the trail and nearby La Jolla canyon was food-driven: early inhabitants could walk down to the tide pools or beach below and pick up dinner, or pick up rabbits at the top of the cliffs and within the canyon. 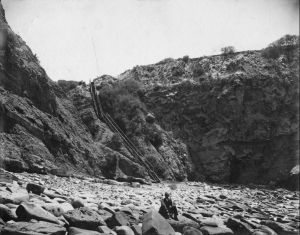 3. The area just above the bridge, along the cliffs, was once known as “Dead Man’s Leap.”

In the 1890s, sightseers would take balloon rides and watch the antics of a local showman and daredevil named “Professor” Horace Poole. Rumor has it that he leaped from a springboard in the surf, 100 feet below. It was a favorite spot of many thrill-seekers for a long time, in fact, though the diving practice eventually gave way to lowering people by rope over the edge of Devil’s Slide (the long canyon that descended to the shore) and allowing them to dangle and peer into the dark caves along the coast, which were otherwise difficult to enter.

4. In 1899, the railroad built a steep wooden stairway from the top of Devil’s Slide (above the trail) to the shoreline.

The railroad was looking to improve access to the caves and abalone beds below, especially as La Jolla was quickly becoming a hugely popular tourist destination (and also perhaps to put a stop to the jumping daredevils!). The rocky cliffs, parks, beautiful coastline, hiking trails, and sea caves were growing local attractions, and people were traveling by rail from San Diego and beyond. So, they commissioned all unemployed locals to build the bridge as a sort of public works project.

One theory behind the reason for the name “Devil’s Slide” is all of the rock slides that occurred before the land was inhabited, a problem that made its descent all the more dangerous.

5. The white bridge that’s there today wasn’t constructed until 1991.

The wooden white bridge was constructed to cross the gulch and make a safer pathway for the hiking trail soon after it became a historical destination. Sadly, much of the hiking trail has fallen into disrepair, and reconstruction is in the works as commissioned by the City of San Diego.

6. The Coast Walk Trail is actually part of the California Coastal Trail.

The CCT is a soon-to-be completed 1,200-mile long hiking trail that follows the California coast from Mexico all the way to Oregon. Other La Jolla trails that are part of the CCT include the Coastal Meander Trail (near La Jolla Cove); though parts of it are still incomplete, it’s possible to traverse the entire length of the CCT today.

The La Jolla Coast Walk Trail is just about 0.6 miles and begins at either the Cave Store (from where you can walk down into Sunny Jim Cave) or at the small cul-de-sac along Prospect St., where you’ll find a parking lot with about ten spots. Assuming you can snag a spot, begin the hike by walking downhill toward a view point, where you’ll pick up the designated Historic Coast Walk Trail. Follow the hiking trails along the bluffs; you’ll soon spot that white footbridge we mentioned.

Remember to keep an eye out for sea lions lounging on the rocks below, nearby La Jolla Cove and La Jolla Shores, downtown La Jolla Village, and groups of kayak tours out on the water! Those looking to explore on wheels can adventure along one of La Jolla’s several bike paths.