The Mormon Temple in San Diego

Let’s start with a quick note about the amazing photo of the San Diego Mormon temple photo in the banner of this article. It’s from a super-talented photographer and friend of ours, Jeff Bommarito. You can–and should–see more of his work on BommaritoArt.com.

You might look at an undertaking like this temple and pause to think about the business side of things. And obviously, churches don’t run without a certain machinery behind them; that’s why there are architects who build places of worship, that’s why there are church secretaries, and that’s why there is even a growing business in the sector of software for churches. But the longer you look at this magnificent temple, the less you think about how difficult it must have been to build. You start to think, “Wow, I can’t believe how beautiful this is.”

Architecture is as much an emotional art as is music. The difference with architecture is that we are also compelled to ponder the science and engineering of the construction. This is especially true with very large structures. Like standing in the shadow of a mountain, we are taken by the sheer size of the thing compared to us. It is fascinating to think about how a mountain was formed. But it is even more awe inspiring to stand in the shadow of a handmade structure conceived of and executed by humans like ourselves. When faced with such a monument, we can’t help but feel at least a little touched by the divine.

What to Know About the San Diego Mormon Temple? 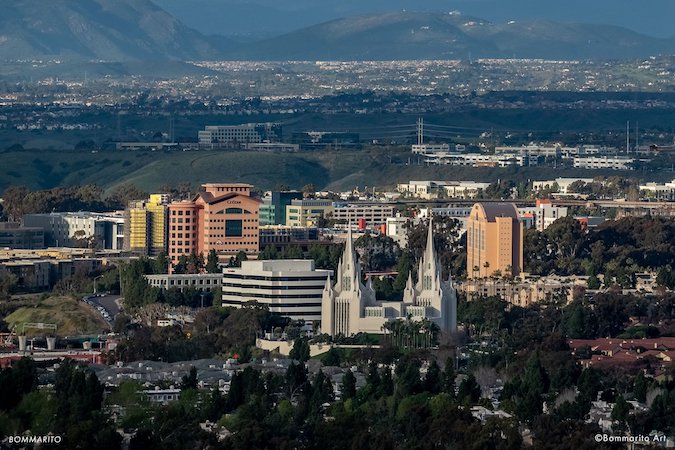 The La Jolla Mormon temple by day. Photo by BommaritoArt.com.

The outside of a temple has one main function: It is to create awe in the hearts of those outside the faith. The inside of the temple is for those who are literally insiders. Temple exteriors serve as a passive evangelistic tool of sorts. It gives the outsider a hint of the divine experienced more fully within. If it feels this good to be in the presence of a temple, imagine how much better it must feel inside the La Jolla Mormon Temple. The most important thing you need to know about the temple is that it does its primary job extremely well. You can’t see it, even from a distance, without wanting to get more of what it has to offer.

In size, the San Diego Temple is the 24th largest. Its 72,000 square footage is rather impressive compared to the over 200 temples it dwarfs. You can see the twin towers from a distance even before you glimpse the scope of the 7.2 acres of land. As you get closer you will notice those two majestic towers are not alone. They are each accompanied by four smaller spires like fingers on a hand reaching up toward the heavens. If you are a Mormon, you already expect to see the statue of the angel Moroni at the tallest point.

The Temple was announced in April of 1984. Temples generally get one open house viewing for the general public before being consecrated. Open house for the San Diego Temple was almost exactly 9 years later. For those noticing a numerological coincidence, the open house was enjoyed by 720,000 people inside the 72,000 sq ft building on a 7.2 acre property. One wonders if there might be more than coincidence at work regarding these auspicious appearances of the number 72, a religiously significant number.

Q: What Religion is the La Jolla Temple in San Diego?

LDS is a relatively modern offshoot of the traditional Christian faith. Historically, it is one of the smaller movements within the larger umbrella of the American Restoration Movement within Christianity. From that movement, we got denominations like the Church of Christ, the charismatic Pentecostal movement, and the LDS. All are extremely different and offer very little interoperability. But they all sprang from the desire to return to the original church founded by Jesus and get as close as possible to that original intent. That is the one thing all Restoration Movement churches have in common. The San Diego California temple represents a part of that proud tradition.

Q: Where is the La Jolla Temple located?

If you want to book a trip to visit the temple (it’s across the 5 freeway from a Best Buy), here are the particulars:

Before finalizing your plans, there are a few more things you will need to know:

Q: Can anyone go inside the La Jolla Mormon Temple?

If you are not a Mormon, you cannot visit the San Diego California temple interior or any other temple interior unless you are a member in good standing or happen to find one in the process of an open house. There are occasions when a temple has to be re-consecrated, perhaps due to construction or storm. Before consecration, there will usually be a new period of open house available to the public.

To enter a temple during a period of consecration, a Mormon must be a member in good standing and have a temple recommend from state-level officials of the LDS church. If you are a Mormon, you likely already know the rules for preparing to enter the holy temple.

All others are welcome to visit the spectacular grounds and appreciate all other aspects of the temple. You can also visit the visitors’ center honoring the San Diego Mormon Battalion about 10 miles from the temple proper.

Q:  What is nearby the La Jolla Mormon Temple?

Visiting the Mormon Temple in San Diego is like being transported to another world. The best day in the Magic Kingdom has nothing on a San Diego California temple wedding. That feeling doesn’t end when you leave the temple. There is a certain aspect of otherworldliness permeating throughout La Jolla and greater San Diego. When you step into that world, you are still going to need to know where to stay, where to eat, and what to do.

Just know that when you enter San Diego, you are entering the unofficial coffee shop capital of the world. Your favorite cup of coffee will come from that little shop you visited while there. You can also bring your dog to the party. You will find hotels more welcoming of your dog than your own home if such a thing is even possible. Canines rank San Diego K10 out of 10 bones on the puppy love scale.

One of the best reasons to visit one of the historic and awe-inspiring sites in San Diego is that you have plenty to do before and after the main event. The San Diego Temple is the cherry on top of an already decadent treat. Whatever your religion, you will be right at home in the city. LDS is the third largest faith group by number of members and number of congregations.

You don’t have to be Mormon or even religious to appreciate the San Diego temple. Make it one of your first stops. You won’t be disappointed.