While a tsunami feels very unlikely in San Diego, it can definitely happen. With the propensity for the Big One, what scientists and civilians call a large earthquake that would be a life-changing event for California, it could lead to a tsunami in coastal towns like San Diego. A tsunami in San Diego is rare but it should be discussed and preparations should be made.

Even though it seems like it won’t happen in our lifetime, the tsunami San Diego possibility is higher than you think. Luckily there are safety measures. For example, check out the La Jolla safety guide. There is also a San Diego tsunami warning made to alert the population. Wherever you live in the area, read below for more tsunami information.

The tsunami warnings in San Diego are a valuable resource, but this sort of disaster can come at a moment’s notice after a large earthquake. They have happened in the past and will eventually happen again. While the San Diego tsunami risk is low, it is still possible. That’s why we all need to be aware of this risk and make preparations, wherever you are located in the county.

The Risks of a Tsunami Hitting the San Diego Coastline

You’re probably wondering, “Is San Diego at risk for tsunami?” The short answer is yes, but it’s not very likely that you will encounter a tsunami. The risks are low, but they remain when you settle near the coast of San Diego. Whatever you think about the possibility of a tsunami hitting the coastline, tsunami San Diego preparation is necessary because if you stay in the area your whole life the odds are one will encroach on the shores. Not only is this something to include in your thoughts when you’re thinking of moving to San Diego, it’s something to keep in mind if you already live here. You’ll have to live in San Diego a long time for a tsunami to occur, but it’s still something to think about.

Has there been a Tsunami in San Diego?

Tsunami San Diego history is actually more clear than you might think. Over the last 150 years, there have been 13 tsunamis that have been large enough to cause damage or hurt people. This number is probably larger than you thought. That’s why there is a tsunami advisory in San Diego to warn the public when there is a large wave coming.

It may feel like there will never be a tsunami in San Diego, but this is untrue. San Diego has 70 miles of coastline that could be hit by a tsunami even after a distant earthquake. An earthquake doesn’t need to occur in California for a tsunami to hit the coast. There are more situations that can lead to a tsunami hitting San Diego.

What Would Happen if a Tsunami Hit San Diego?

If a tsunami hit the San Diego coastline, the results could be varied. It would likely be because an earthquake occurs in California or across the sea. Then there would be a tsunami alert San Diego that will tell people it is coming. People will prepare by going inland and high up so that they are safe.

A tsunami could damage property and hurt people, but it could also simply get the land wet. While the results of a tsunami could vary quite a bit, it is always best to prepare for the worst case scenario. It depends on the severity of the tsunami, but if you are thinking about relocating to San Diego for the rest of your life and would like to avoid this entirely, you should think about moving inland.

How Far Inland Would a Tsunami Hit San Diego?

You can take a look at a San Diego tsunami map to see where it could hit. The recommended distance to be safe is two miles inland and 100 feet above sea level. While this is how far you will need to go if a tsunami hits to be completely away from it, you can also plan ahead and move two miles away from the beach and at least 100 feet up. Moving inland will affect other parts of your life as well. La Jolla weather, for example, is different from the weather inland and will have different conditions than other parts of San Diego. It doesn’t matter if a tsunami is rare, anything can happen in this world and be prepared by knowing where you need to be should a tsunami hit.

What to do If You are Under a Tsunami Warning 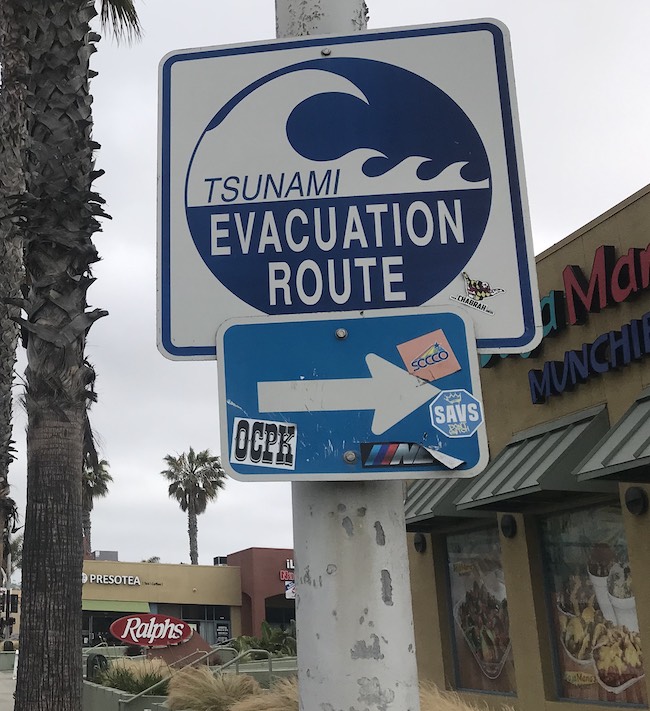 Tsunami evacuation route sign by the Ralph’s on Mission Blvd. in Pacific Beach

There are a lot of dos and don’ts during tsunami alerts. First, you shouldn’t panic. While you should take whatever you can with you in case your home is hit by the water, it is also imperative not to waste time and get to higher ground that is at least two miles inland.

If you’re wondering how to prepare for a tsunami, you should create a go-bag. A go-bag is a backpack or another case that you fill with things you aren’t using in your daily life but would come in handy should a tsunami hit. This includes products that you don’t take out and use but save for an emergency like this. That way you won’t have to pack at the last minute, under pressure, and stressed about the encroaching water.

There are a lot of things that you should know about what to do before, during, and after a tsunami. Before a tsunami hits you should pay attention to the warnings, make preparations, and head out to safer land. During a tsunami you should stay in that safe place and monitor the alerts. Then, during a tsunami San Diego aftermath, you should wait a while to see if there is damage to your area, when it is safe to return home, and what else you will have to do after the water recedes.

The most important thing to do when you are experiencing a tsunami warning is to stay calm and go to a place where you know you will be safe. It’s pivotal not to spend too much time packing stuff or worrying about your belongings. When there is a tsunami alert, the rest is up to fate.

Where is the Safest Place to go During a Tsunami?

Of course it’s a good idea to go as far inland as you can. You should seek a higher place, whether you are able to get far away from the coast or not. You’ll also want to make sure that if you’re on top of or in a tall building that the foundation is solid and that the water won’t damage the building enough to destroy it. These are all things to think about.

Most importantly, use a San Diego tsunami evacuation map to find the best places to shelter in place and wait it out. If you have relatives to stay with far away from the coast, you should take that option. Going far away from the ocean is a great way not only to keep safe but to provide the peace of mind you need during this time.

Tsunamis are unpredictable and volatile. They don’t happen often in San Diego but they certainly have in the past. If you live your whole life here, odds are you will experience one. It may not be the most damaging or dangerous, but it is important to prepare for the worst. Tsunami San Diego preparations should be more widespread because sooner or later, the city will experience a large wave that could lead to death and damage to property. That’s why it’s important to keep it in mind and do your best to be ready for when the time comes.