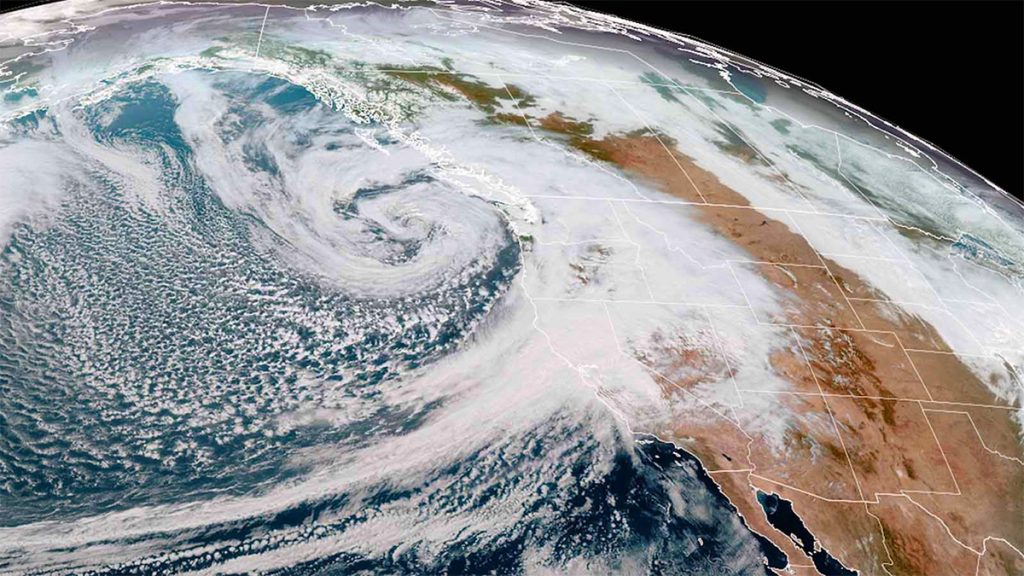 One global weather pattern known as the Atmospheric River is a phenomenon along the west coast of the United States that happens infrequently. Still, it has been growing in intensity over the past few years.

The increased intensity of these weather patterns can be seen in the record-breaking rainfall in Northern California in the Fall of 2021, which is a significant driver behind the recent catastrophic flooding in Washington.

The role that an atmospheric river plays on average winter rainfall and the benefits that stem from the phenomena isn’t well-known until now.

What Is An Atmospheric River?

An atmospheric river is an extremely long, concentrated, and narrow region of the atmosphere that transports most of the water vapor from the tropics toward the poles. It is an increasing intensity phenomenon and has recently been linked to more extreme rainfall events along the west coast.

What Causes An Atmospheric River

An atmospheric river is created when a cold front sweeps up warmer water vapor from an area such as the tropics, forming a band of dense water vapor that gets caught up by a warm conveyor belt airflow that, when making landfall, typically becomes rain or snow.

For a long time, little was understood about atmospheric rivers and how they impacted rainfall along the west coast. However, with more research, scientists are beginning to see the importance and potential dangers of increasing weather events like an atmospheric river.

That research has led to a better understanding of these weather phenomena’ role in the ecosphere, including frequency and intensity and the impact on average winter rainfall.

Here are 6 facts about atmospheric rivers you probably didn’t know that will help you understand these weather events and the value they provide for rainfall to the region.

Atmospheric rivers in San Diego are common deliveries of fresh water to the region and bolster the winter rainy season. As a result, much of San Diego’s heavier rainfall is sometimes attributed to atmospheric river activity. These heavy rainfalls are what is an atmospheric river storm and can have significant impacts on the local area.

While atmospheric rivers are rare, they are increasing in frequency and intensity. As a result, the next atmospheric river is a concern that it may lead to catastrophic rain, flooding, and damage in California.

Atmospheric rivers are projected to have a slight uptick in frequency but are significantly more powerful. In addition, as weather patterns change as a result of climate change, the warm water of the tropics creates even more water vapor absorbed in the event of an atmospheric river.

Atmospheric Rivers Are The Largest “Rivers” of Fresh Water on Earth

While not common, at any given time, there are approximately 5-7 atmospheric rivers traveling throughout the world, creating a range of 7-15 times the average water discharge of the Mississippi River, making atmospheric rain an incredible source of freshwater.

Atmospheric Rivers Are Rated in Categories

As with other weather hazards such as hurricanes and atmospheric rivers are rated and classified by severity. They are identified in categories from Cat 1–seen as primarily beneficial, while a Category 5 atmospheric river is primarily hazardous causing significant rainfall that may contribute to excessive flooding.

One of the most critical drivers of San Diego rain derives itself from an atmospheric river to the tune of over 50% of annual rainfall in the region is attributed to the phenomenon.

While there has been a gradual increase in atmospheric rivers in recent years, the concern is the increased severity. Research projects that in the near future, a California atmospheric river storm will lead to catastrophic damage to the area and local economies with far-reaching impacts.

Whether this winter or the next sees a significant atmospheric river storm isn’t a question of if but rather a question of the rainfall and accompanying issues that stem from its occurrence.

The banner image on this article is an NOAA satellite rendering showing an atmospheric river of moisture extending from Hawaii to California, also known as the “Pineapple Express.” Image courtesy of National Oceanic and Atmospheric Administration (NOAA).