Watch a Game at Petco Park

Are you a San Diego baseball fan? It’s not often you stroll through a bustling downtown of glamorous hotels, top-notch restaurants and sky-high buildings…and then stumble upon a massive, professional ballpark stadium. South of La Jolla in downtown San Diego, this is exactly what you’ll find. Welcome to Petco Park, the awe-inducing stadium stretching from 7th to 10th Street! 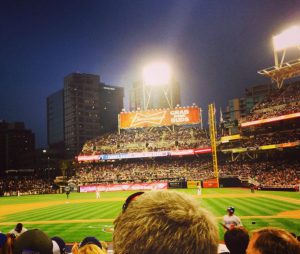 Petco Park, able to house over 40,000 people, is home to the San Diego Padres; it has been since the stadium was built and construction finalized in 2004. The first game, however, was played by local San Diego State University’s proud Aztecs. This game brought forth high numbers so high it became the biggest college baseball game in history! 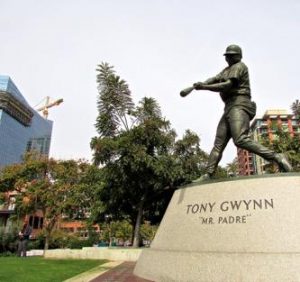 It’s not often you stroll through a bustling downtown of glamorous hotels, top-notch restaurants and sky-high buildings…and then stumble upon a massive, professional ballpark stadium. South of La Jolla in downtown San Diego, this is exactly what you’ll find. Welcome to Petco Park, the awe-inducing stadium stretching from 7th to 10th Street!

When the Padres played their first game against the San Francisco Giants in 2004, something ironic happened. Many fans were lined at the gates, eager to be the first person to step into the park. Interestingly, the first person to enter the brand new stadium in 2004 was Brent Walker, a 17 year old who wore, not a Padres jersey, but a Giants jersey! (If you’re a Padres fan broken-hearted at reading this, there is good news; the Padres won that game.)

If it’s spring, summer or early fall, be on look out for tickets because the game is being played. Tickets get you entry into the game and also give access to the vendors within, free give aways for many games and extra entertainment. For example, many Sunday games have children-focused fun like face painting booths and games. It makes for an ultimate family-friendly, energy-packed day that’ll have the kids asleep before their normal bedtime!

As a Music Venue

It’s not only the baseball games here that are big. The names in music featured here are on a very grand scale. The first concert ever hosted here was in 2005 for a classic group that’s famous around the world: The Rolling Stones.

Since then, artists such as Paul McCartney and LED have performed; and in 2015 folks like Taylor Swift, Nickelback and The Who will take the stage by storm. To make sure you don’t miss your favorite artist, be on the lookout for upcoming concerts at Petco Park’s event page.

A diverse range of other events are hosted here, many involving athleticism and support for local organizations and charities. Some examples include:

– Comic Con: This event, famous worldwide and drawing more celebrities each year, is hosted each summer in the heart of downtown. It’s purpose? To raise awareness about comics, celebrate the arts and culture of comics and explore the ongoing things they offer. Petco Park has become the site of this event’s apocalypse-inspiring “The Walking Dead Escape”. This is also known simply as…The Zombie Run.

With many large-scale venues, parking can be tricky. The great thing about Petco Park is that it’s very accessible by public transportation. With the trolley and MTS (Metropolitan Transit System) buses, you can come from afar without having to deal with hassle and hiked expense of parking. Jump off one of the downtown stops and stroll to the park, ready for a good time!