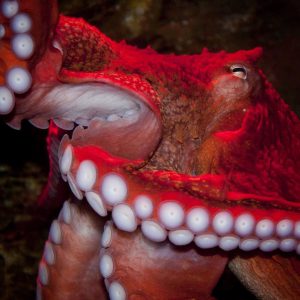 No need to travel to the bottom of the ocean: In just a few minutes’ drive, you can have a close encounter with some of the weirdest sea creatures at La Jolla’s Birch Aquarium. From killer shrimp (totally real!) to walking “fish” these unique underwater creatures will mesmerize young and old. Bonus: this trip makes for a great family-friendly activity.

Giant Pacific octopuses (top image) is a great contender for the largest octopus species weighing up to 157 pounds and measuring 11 feet long! These intimidating creatures are a deep ruby color, as you can tell from the Birch Aquarium’s female Giant Pacific octopus. Many of the suckers on her tentacles are actually lined with small hooks or hairs to help grip. We’re told that “[when she’s] moving around, it’s a sight to see to say the least.” Giant Pacific octopuses can be found around the Pacific Rim (western coast of North America and eastern coast of Asia) down to Japan.

There are three other types of giant octopuses, found around the southwestern tip of Africa, the southeastern tip of South America, and New Zealand. 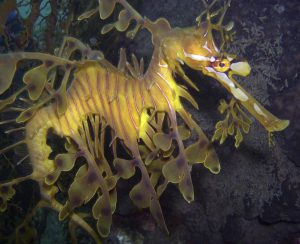 The mysterious Leafy Seadragon was named after its leaf-like shape and resemblance to the mythical Chinese dragon. A close relative to Sea Horses, Sea Dragons are much larger with leaf-like appendages and when fully grown they can measure up to 18 inches. Their leaf-like appearance enables them to camouflage quite well into floating seaweed. These sea creatures are fascinating to watch as their body hardly moves.  Their movement comes from translucent fins found on the sides of their heads and dorsal fins. It’s almost as though an invisible force is helping them move, causing them to glide in slow and grace-like patterns.  [source: yankalilla.com]

In the case of the mantis shrimp, truth is stranger than fiction! This fascinating marine crustacean is a serious predator, and sports powerful claws that are used to attack and kill prey by spearing, stunning, or dismembering.

The mantis shrimp is commonly separated into two distinct categories: spearers and smashers. Spearers skewer their prey with jagged spear-like claws and eat them. Smashers punch prey with club-like claws, but this isn’t just any punch – smasher punches are so fast that vacuums of air are actually formed in the water as the punch travels to the prey. These vacuums then collapse, creating a shock that is so intense that it actually produces light and heat! Mantis shrimp are very colorful and have a shimmering psychedelic appearance that is made even weirder by their two eyes that have three pupils each.

Loggerhead sea turtles are the largest hard-shelled turtles in the world and have been spotted off the shores of La Jolla! Sadly, loggerhead turtles (pictured above) are becoming more and more rare. These turtles are an endangered species due to worldwide loss of nesting habitats and commercial fishing practices that accidentally trap and kill turtles. The Aquarium’s loggerhead turtle was rescued and resides here permanently after it was declared unable to safely return to the ocean. Loggerheads’ backs are host to over 100 animal species and 37 algae species, making this gal a home to many.

It’s not clear if these species affect their host turtles, but their presence does hide shell colors and may improve camouflaging ability. You can find a video of the Birch Aquarium’s loggerhead here and see her gorgeous yellow, gold and brown shell for yourself! 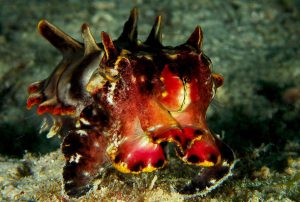 The flamboyant cuttlefish, named for its bright pink, red, and yellow colors, is a poisonous variety of cuttlefish. Their toxic nature is not only conveyed through their bright colors, but a certain wiggly walk they perform across the ocean floor. The flamboyant cuttlefish is the only type of cuttlefish that can walk. Confusingly, cuttlefish are actually mollusks, not fish, and belong to the same family as octopuses and squid. The eyes of cuttlefish have a “W”-shaped pupil instead of the round one seen in humans! When cuttlefish look and focus their eyes, the lens inside the eye moves relative to the retina instead of staying in place and reshaping as it does in humans.