The Ultimate Guide to Great White Sharks in San Diego 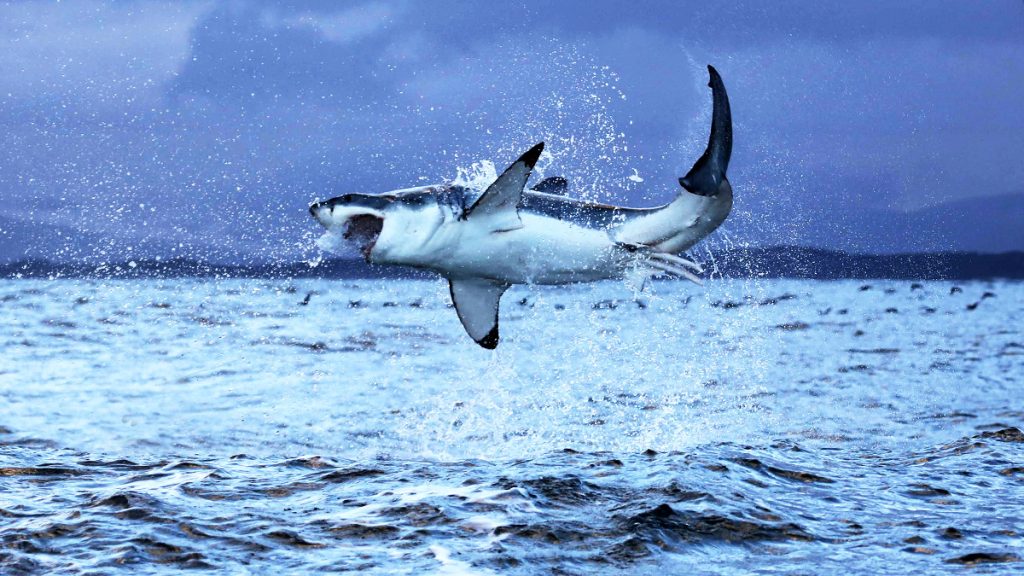 Whether you’re an avid surfer, an occasional swimmer, or hardly even get your feet wet at the beach, it’s impossible to resist the temptation of cooling off in the ocean’s healing waters on a temperate day in San Diego. Taking an ocean dip is one of the best ways to regulate the nervous system and restore a sense of calm, but it is still essential to be aware of what lies underneath the surface of the water. We’re talking about great white sharks in San Diego.

Of course, we’ve all seen the dramatized award-winning thriller–Jaws–alongside other shark-related movies that have caused upheaval and worry amongst beachgoers across the globe. Yet avoiding the water due to the slim chance of getting bitten by a shark is beyond silly–it is not only infrequent to see a great white unless through an expedition or cage-diving experience, but also rare to encounter an aggressive shark.

In the last century, there have only been around 20 unprovoked shark attacks in the San Diego area, only 2 of which have resulted in fatalities. In fact, in the entire state of California, there have only been 203 reported shark incidents off the shore of the Pacific Ocean since the 1950s, 15 of which were fatalities. In other words, you are more likely to suffer injuries or fatalities from a car crash, heat stroke, or a coconut falling on your head. That’s right, a coconut. To ease your worries, we’ve gathered the down low on all things great white shark related to San Diego.

So, are there great white sharks in San Diego? In a word, yes. But there is a lot more to know about these magnificent creatures. Let’s dive in, shall we?

What to Know About Great White Sharks in San Diego

The white shark, which many refer to as the great white due to its enormous strength, length, and intimidating size, has reportedly been involved in more attacks on humans than any other shark in the world. The size of a great white is startling, and they can exert incredible force. A common myth asserts that shark attacks often happen because they mistake humans for seals. However, this is generally not the case. Often the reason for shark attacks is the erratic motion of humans as they move through the water, in addition to the stark contrast between their skin and swimming apparel can befog sharks in murky or low-visibility waters.

Now, in reading this, we want to preface that this article isn’t meant to scare you away from the pleasures of the ocean. Instead, we have to place our efforts on informing you all about great whites so you are aware of what time of year, day, and location in San Diego is safest to get your swim on. So next time you plan to do your early morning dip or a night swim, here are some things you should know.

As the weather becomes more agreeable and the Pacific becomes slightly warmer, it’s second nature to make a trip to the beach for some fun in the sun. Unfortunately, this is also the time white sharks appear in deep blue. Summer through Fall is hunting season–specifically, April through October. Great whites will come closer to the shoreline to search for sources of nutrition, with 8:00 am-6:00 pm being when sharks are most active. That said, sharks prefer to swim around the shores throughout dawn, dusk, and night. If you want to avoid feeding hours or being the main target of a shark’s snack, it is best to avoid swimming alone or at night. They don’t call it “shark week” for nothing.

Just kidding, as we mentioned earlier, the chance of encountering or getting attacked by a shark is wildly low. Worrying about getting bitten is like walking around with an umbrella in San Diego, waiting for it to rain.

How to See Great White Sharks in San Diego

There are a few ways to observe great white sharks from a safe distance, including cage-diving in Guadalupe Island off of Baja, California, or taking a boat tour where you may or may not catch a glimpse of a white shark perusing around looking for their next meal. Below, we’ve listed a few ways to experience a great white up close and personal without provoking it or putting yourself at risk. If you’re feeling adventurous and want to test your wits, you can opt for snorkeling, kayaking, or swimming in La Jolla Shores as you eagerly wait to spot a great white–but don’t get your hopes up. You might be able to see other types of sharks–perhaps leopard sharks, which are more common in the area. The chances are slim, but there is always a possibility.

There aren’t a lot of options when it comes to San Diego shark diving expeditions, especially when compared with more tropical destinations. That said, off of Isla Guadalupe–more commonly referred to as the Island of the Great White Shark–you can experience a 5-6 day diving experience via luxurious and secure shark diving vessels. You can also opt to go shark cage diving, wherein you’ll be in scuba diving gear locked in safe as food is dangled nearby to draw in the terrifyingly large predator. This is one of the most remarkable ways to see a shark up close and personal, observing their gills, razor sharp teeth, and penetrating eyes a mere few feet away.

San Diego shark tours are few and far between, with most experiences located in Mexico. That said, there are Boat tours in San Diego where you might have the opportunity to witness a shark in their natural habitat. Some offer packages where you can hop into scuba or snorkel gear with a trained professional or shark diver and venture away from the mainland towards the open water. You’ll plunge into the ocean’s depths, seemingly in the middle of nowhere, and watch in amazement as white sharks and other marine life pass you by.

Sharks have migrated from the waters near the coast of Los Angeles toward the south, namely in Torrey Pines and Solana Beach, though you can sporadically spot sharks throughout San Diego at any given time of day or year. Recent shark sightings the San Diego area has reported include a local fisherman who recently spotted a 14ft great white shark–on video–preying on a seal just a few feet away from their nearby boat. In April 2017, a woman was attacked offshore in the waters of San Onofre State beach close by the Marine Corps Base Camp Pendleton, though the last deadly shark attack in San Diego County occurred in 2008 in Solano Beach.

Other shark sightings San Diego locals have since include some large great whites in September of last year in Del Mar, San Diego, and Solana Beach, which reportedly has the most sharks per capita. It ranks second, next to Florida, for the most unprovoked shark bites in the United States. While the open ocean is a more likely place to spot a shark, some pelagic shark species even pass through the bay. San Diego Bay sharks include Blue sharks, Mako sharks, Thresher sharks, Sevengill sharks, Swell sharks, Hammerhead, and Tope sharks. Bear in mind that shallower and warmer waters are desirable to sharks, and attacks can occur in as little as three feet of water.

Why is there an increase in great white shark sightings in San Diego?

A change in climate and an increase in seal conservation over the last several decades are two major contributions to why there may appear to be more great white shark sightings in San Diego. Summer and Fall are also hunting seasons for great whites, and their preferred prey–seals–are densely populated along the shoreline of San Diego, especially in La Jolla. Additionally, pupping and molting season for seals takes place between March to October, which naturally sharks gravitate towards. Because of heightened seal protection and shark conservation, in tandem with hunting and mating season, there is an increase in great white shark sightings in San Diego over the past couple of years.

Where do great white sharks live?

Generally, white sharks live in mild temperature coastal waters, mainly where an abundance of fish and marine mammals reside. Many sharks live primarily in warm and shallow waters, but can also be found in colder waters in the Pacific and the Atlantic Ocean. Luckily for San Diego residents, spotting a great white shark in San Diego is like spotting a needle in a haystack. You’re more likely to find great whites in South Africa and Australia.

How big do great white sharks get?

The largest great white sharks reportedly extend to 20ft in length, but more commonly seen are around 11-14ft. Females average approximately 15-16 feet, and white males reach up to 13ft. Shark sightings in San Diego have typically been within 12-16ft.

Are there great white sharks in La Jolla?

Decades ago, there was a brutal shark attack that happened off La Jolla Cove, where a woman was aggressively bitten by a 16ft great white, but realistically La Jolla great white shark sightings don’t happen super often. That’s not to say great whites don’t exist in the area–due to the larger concentration of seals in the La Jolla area, there is greater precedence of great whites than in other areas of San Diego, except for Solana beach.

How common are great white sharks in San Diego?

It is estimated that around 5-10 types of sharks in San Diego exist within a mile of the shore, with most being harmless unless provoked. These shark species include Leopard sharks, which tend to flock in large numbers to La Jolla Shores for the mating season each year. If we’re being honest, San Diego shark sightings are far less common than in other regions of the globe. If you’re hoping to see great white sharks in San Diego, you’re best off booking an expedition that ensures you’ll encounter one instead of swimming out to sea in search of a shark.

The Last Word on Great White Sharks in San Diego

Now apply that SPF and get your ocean fix!

About the author: Courtney Pester is a San Diego-based, San Francisco bred millennial with a passion for design and self-expression.  She prides herself in her charcuterie board making skills and has a soft spot for animals. When she’s not pumping out articles, you can catch her playing tennis and enjoying the diversity of events and restaurants San Diego has to offer.