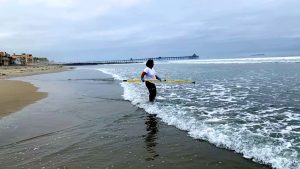 San Diego County will use a new DNA-based water testing method to monitor bacteria levels at local beaches, including two in La Jolla.

In La Jolla, testing sites will include the end of Avenida de la Playa in the La Jolla Shores area and Black’s Beach. The county plans to expand testing to more than 70 miles of San Diego shoreline.

The move makes San Diego the first coastal county in the entire U.S. to implement the new DNA-based testing technology for beach water sampling, according to county Board of Supervisors Vice Chairwoman Nora Vargas.

A post shared by City of San Diego (@cityofsandiego)

Bacterial tests such as these are a public safety measure. When the bacterial level reaches too high a concentration, county officials will issue advisories. The La Jolla Children’s Pool, as an example, is currently under an advisory because of the harbor seal population.

“Faster results are going to allow the county to issue or lift beach advisories on the same day samples were collected. And it reduces the time the public could unknowingly be at risk and when the water is contaminated,” Vargas said.

Since the DNA-based system is more sensitive to bacterial levels than older methods, city officials will be able to test, report, and issue or lift advisories quicker.

“In San Diego we had 104 advisories in 2021, and about half lasted a day or a little more, so it’s important that we are able to test, retest and report and lift advisories as needed,” said Heather Buonomo of the county’s Department Environmental Health & Quality.

The public can view beach water quality and safety data collected by the program at sdbeachinfo.com.